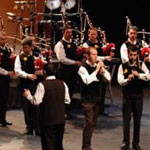 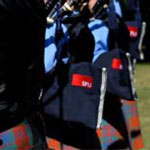 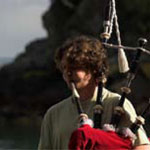 He played with Cap Caval Pipe Band since 2000 and also with the Shotts & Dykehead Pipe Band in 2007 and 2008. He was also a member of Simon Fraser University Pipe Band.

In addition, he plays tenor and soprano saxophone with several bands and performed with Shotts during their concert at the Glasgow Royal Concert Hall in August 2008. 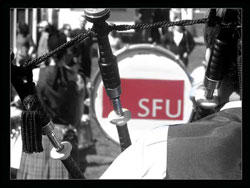 Beside bands, Xavier competes regularly on the solo circuit in Scotland.

He develops the RedWood reeds in collaboration with Jakez Boderiou; they are hybrid drone reeds between traditional cane reeds and synthetic reeds. In 2011, he released the Boderiou pipe chanters (band and solo, including a bagad chanter model). Since 2013, Boderiou Bagpipes are released and now available through www.boderiou-bagpipes.com.

The Morenn album is released in 2014. The ‘Morenn’ project is the result of the meeting between Xavier Boderiou, Sylvain Barou and Jacques Pellen around the classical music of the Great Highland Bagpipes.

The development and manufacturing of the Boderiou Sheepskin Pipe Bag started in 2019.

The Liamm project is a meeting of Xavier Boderiou, Sylvain Barou, and Antoine Lahay in 2020. The connections are multiple: the interweaving of instruments, sounds and harmonics but also of Breton, Irish and Scottish music. This unique album highlights the Great Highland Bagpipes in its specific context in Brittany, at the crossroads of repertoires, history and stories…

In 2020, he released the Boderiou Uilleann Pipes chanters and reeds.

Xavier began teaching groups on a weekly basis but also workshops in 2005. In 2009 and 2010, he was an instructor at Piping Hot Summer Drummer (SFU summer school). Since 2010, he taught in Scotland, Switzerland, Australia…

This year we are able to provide a top Breton pipe instructor during our second week. Xavier Boderiou is a name that some of you will know. Xavier is one of the top pipers in Europe and has sparkling fingers. He piped in Shotts and Dykehead for two seasons and is now a piper in SFU and will be competing with us at the Worlds in August. He is also a very accomplished Breton piper.
Our plan is to have Xavier teach regular highland piping classes in the mornings of week two and Breton music in the afternoons during the optional workshop sessions Jack Lee

Sessions can be focused on Scottish or Breton repertoire, on group management, listening and maintenance of the instrument.

We also offer online courses through the software Skype:

Book your session or get in touch with Xavier: contact@boderiou.com